The dark, fertile soils to the west of Talbot have been used to cultivate grapes for wines from as early as the 1850s. [1] An enterprising man named Samuel Scrase also recognised that the clear, flowing waters of Bet Bet Creek would be the perfect place to set up a brewery. He established Scrace’s Brewery on the banks of the waterway in April 1860 in Lillicur, just west of Talbot, on a property owned by JC McPhee.[2] Nothing remains of the brewery but it is reported to have been a ‘fine large building’ with a tall chimney.[3]

Samuel Scrase was a typical Englishman: fond of horses, dogs and ale. In a sad tale, one day in 1861 he was travelling with his dog from Mountain Creek back to Lillicur when he came across a snake. As dogs are wont to do, he grabbed the snake in his jaw and was bitten when he relaxed his grip. Neither the dog nor the snake survived the encounter.[4] 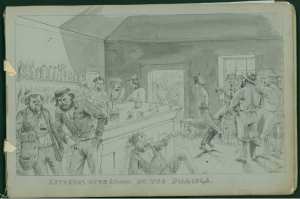 Scrase obtained his Brewer’s licence in June 1860, together with his brother Edwin. During the 1860s, the brewery was known by many names including Scrase Bros Brewery, Bet Bet Brewery and Black Horse Brewery. Their most famous beer was the Scrase Bros Bet Bet Ale.[5]This beer, alongside those produced by Neace and Cohn Brothers, was popular among the miners of the goldfields.[6] It was the perfect time to go into alcohol production. As the numbers of gold-seekers in Victoria surged, so too did beer and spirit consumption.[7]

At times, brewing beer was a political act. In 1860, politicians argued whether beer brewed in the colony of Victoria could be sold in retail outlets. At the time, this was a privilege only afforded alcohol imported from overseas. One argument for the repeal of the law was the quality of the local beer!

‘… colonial beer, brewed as at present, [was] a far more wholesome beverage than adulterated English beer, and certainly far preferable to the stuff sold as spirits on the goldfields.’[8]
Bendigo Advertiser, 23 July 1860

The Scrase brothers were savvy businessmen and did not tie their fortunes to the whimsies of the politicians, the temperance movement or the luck of the miners. They ran a robust business where they advertised to ‘bakers and cowkeepers’ that they always had yeast and grains on hand at the brewery if ever there was a need.[9]We do not know exactly when Scrase Bros Brewery closed, but it was unlikely to still to have been in operation when Edwin Scrase Died in 1884.[10]

Samuel Scrase was, by all accounts, an interesting character. Tradition has it that he was the first person to bring sparrows to the district. He had a pair sent to him and, one morning, decided that letting them go would provide him with more pleasure than keeping them locked in a cage. He was so delighted by the sight of them hopping from branch to branch that he called all the brewery workers to see the happy sight. They were all given the day off to celebrate![11]