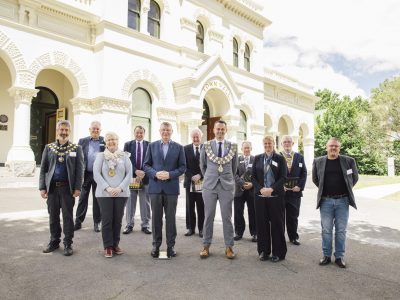 A World Heritage listing for the Central Victorian Goldfields will catapult the region’s tourism profile to the global stage and bolster its recovery from the devastating economic impacts of the pandemic.

An online forum of 90 local government Mayors, Councillors, Chief Executive Officers, key staff, Co-Patrons The Hon Denis Napthine AO and The Hon John Brumby AO, as well as representatives from regional tourism bodies have heard how the bid will serve as a catalyst to transform the region, delivering a crucial post-pandemic economic lifeline to the Central Victorian Goldfields region.

The forum coincided with the Central Victorian Goldfields World Heritage Bid releasing a video with Mayors and Co-Patron, The Hon Denis Napthine AO – all championing the importance of the bid for World Heritage listing.

A message from the region's Mayors, Councillors and Bid Co-Patron The Hon Denis Napthine AO from Australia's historic gold town of Clunes in Victoria.

The partnership remains optimistic that the State Government will support the transformative initiative with $500,000 in funding, through Regional Development Victoria’s $10 million ‘Investment Fast-Track Fund’, to enable critical work to begin to progress the bid. The partnership has already committed $125,000.

This funding will get the bid ready for World Heritage tentative listing for consideration by the State and Federal Governments. It will help the group identify sites that could make the World Heritage list, outline the investment needed to leverage the bid to benefit local jobs, develop World Heritage journeys, support communities and industry, including rebuilding after the pandemic.

The World Heritage listing aims to unlock the full potential of the region, bringing economic diversification, jobs, investment and tourism, and raising the socio-economic outlook for cities, towns and local communities.

City of Ballarat Mayor, Cr Daniel Moloney told the forum a tourism report released last year states that while direct employment of tourism jobs fell seven per cent across regional Victoria, the fall was almost double – at 13 per cent – in the goldfields’ region.

“Covid has been devastating for our communities. Never has this bid for a World Heritage listing for the Central Victorian Goldfields been more important,” he said.

“We are perfectly positioned to transform our region and diversify our economies by securing this international opportunity and leveraging others like the Commonwealth Games.”

“In 2020, United Kingdom World Heritage expert Barry Gamble investigated more than 40 goldrush sites from around the world,” she said.

“While California and Victoria’s goldrushes were found to be the most historically significant of all goldrushes, he found the Central Victorian Goldfields stands out as exceptional among global goldrushes and is quite simply unparalleled.”

“Victorian tourism industry research indicates it could take five years for the industry to recover from the impacts of COVID-19,” he said.

“The Central Victorian Goldfields World Heritage bid has the potential to significantly change the social and economic future of the region for decades to come.”

“This is a deliberate strategy to drive visitation throughout the region and ensure that increased expenditure directly benefits as many people and communities as possible right across the Central Victorian Goldfields,” he said.

“Government support is vital to progressing the bid to the next stage which is getting the bid ready for World Heritage tentative listing,” he said.