The Madame Berry Mine

The Madame Berry Company in Creswick was one of the most successful gold mines of the Victorian gold rush. Across two shafts, the mine produced 374,557oz (10,618kg) of gold over an area of roughly one square mile.[1] Before closing its doors in 1896, the Madame Berry mine paid nearly £1,000,000 to shareholders, making it one of the most successful mines of the 1800s.[2]

‘Not a few residents of the colony, particularly several in the Ballarat district, who are now in affluent circumstances and “holding a high head” freely admit that the wheel of fortune took them for a decidedly favourable turn when they invested at a nominal outlay in Madame Berry Stock.’[3]
The Age, 3 March 1896 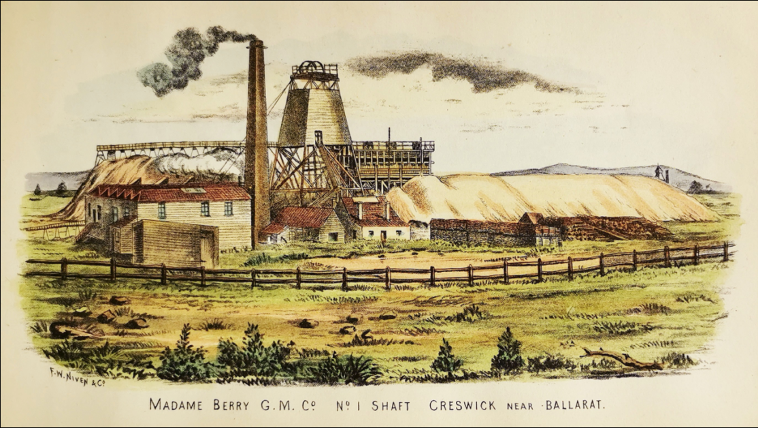 Work on the mine began in May 1879 and the company was paying dividends by 1881. Building on the outstanding success of the first shaft, the company financed a second shaft in 1883 that cost £45,131. This money was put towards wages, two large engines, two 26 feet boilers, a 90-foot-high frame above the shaft and 90,000 bricks.[4]

At its zenith, the Madame Berry mine employed 300 people from Creswick. They worked deep underground, spending hours and hours in the dark to extract the gold that made it one of the largest industrial companies in the colony.[5] By the time the company closed in 1896, it had paid over £420,000 in wages to its workers.[6] Having such a large and prosperous company at Creswick was incredibly important to the prosperity of the town.