The traditional owners of the land upon which the majority of the Ararat municipality now sits were the Djab Wurrung (literally meaning ‘soft language’) people.

Theirs was a rich culture comprising some 40 clans, or around 4,000 individuals. In season, eels were a staple food for the Djab Wurrung and in autumn neighbouring clans moved to the fishing grounds at Lake Bolac where up to 1,000 people gathered to take advantage of the annual eel migration.

The first white people arrived in Djab Wurrung country in 1836 when Major Thomas L. Mitchell’s exploratory party moved through the area. Major Mitchell, who made a journey through western Victoria in the winter of 1836, was the first white man to see the Ararat district and to leave a record of his visit. He named the Grampians, Mount William, the Pyrenees mountains, Mount Cole, Mount Abrupt and the Hopkins River. The publication of his glowing report of “a land fit for immediate colonisation” caught the attention of the New South Wales sheep owners and soon the flocks began to move down the Major’s Line. After a journey of three months, one of those pioneering stockmen – Horatio Spencer Wills, along with his wife and children, and his sheep and cattle – ‘squatted’ in the country south-west of Ararat. He named the outstanding hill on his run ‘Mount Ararat’ because like the Arc, he rested there.

The discovery of gold 14 years later completely changed the scene. 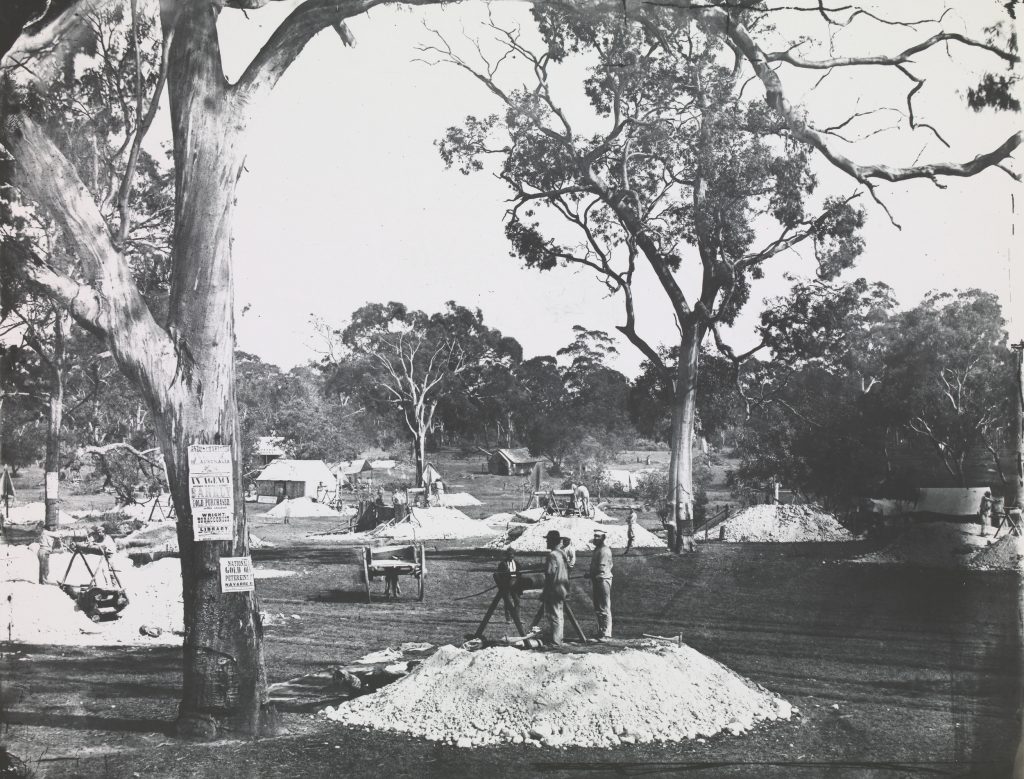 A group of prospectors from Avoca found gold at Pinkey Point on Burrumpbeep run in May 1854, but the rush that followed soon faded out.

Further Ararat gold rushes started with the discovery of the Canton Lead in 1857. The discovery of the Blackman’s Lead a year later was the real beginning of the Mount Ararat rush. Other rich leads in the vicinity of Cathcart were quickly opened up towards the end of the 1865. Miners were successful in getting gold on Bridal Hill, Deep Lead and nearby gullies on the eastern side of the range which divides Ararat from Cathcart. A small settlement of miners’ tent and stores started to appear.

Ararat claims to be unusual in that Chinese miners discovered its riches. In April 1857, a group of 700 Chinese miners on their way to the Clunes goldfields in central Victoria, found gold at the current site of Ararat. News that some Chinese had struck a rich vein of gold on the Canton Lead reached Cathcart one morning in May 1857. The excitement was intense, and as the news spread farther afield miners, storekeepers and shanty owners flocked to Ararat. In the months of April and May, 1857 thousands of miners (both European and Chinese) arrived at the Canton Lead. At one time there were 40,000 people in the district seeking gold. As early as October 1857 it was reported that Ararat was graced with shops, hotels and theatres.

The strong presence of the Chinese led to resentment amongst the European miners and as early as June, 1857 there were incidents between the two groups. One of the consequences was the segregation of the Chinese into separate camps. The longest lasting of these was probably one on the Port Fairy Road.

By the early 1860s the mining boom was over, but Ararat continued as a prosperous town. Ararat become a government town with the vast increase in population leading to the establishment of institutions representing the application of law and order along with necessary health services. Extensive commercial premises were constructed along with churches, schools and most significantly the hospital, psychiatric asylum and gaol. The latter group demonstrating the importance of the town as a regional centre for the colonial government.

The early establishment of Ararat as a district centre ensured its survival after the gold rush had passed. It also sat in the middle of rich grazing country and was able to continue to service this agricultural and pastoral industry.