Maryborough is the centre of the Central Goldfields Shire and by far the largest town in the Shire. It has been an important centre of government administration from the time of the gold rushes and throughout the nineteenth and twentieth centuries.

The country in and around Maryborough forms part of the lands of the Dja Dja Wurrung, lands which extended as far east as Lancefield near the Macedon Ranges and well before European settlers arrived in the Central Goldfields during the 1840s, the area has always been their home. They refer to the region as Tuaggra and many sacred sites in the area are recognised by and for the vast Indigenous history the Central Goldfields celebrates.

As with everywhere there was gradual decline in the Aboriginal population after white settlement, however the Dja Dja Wurrung peoples remain strongly connected to their Country today.

The earliest white settlers (pastoralists) had arrived in the district in the early 1840s. They took up large holdings and built themselves substantial homesteads. They were to be rudely interrupted by the gold rushes which reached Maryborough and district in 1854. By the end of September 1854, there were estimated to be 25,000 diggers in the district spread over a large area. These diggers were ultimately joined by Chinese miners with their numbers reaching 800 by mid-1856. There is photographic and map evidence of Maryborough’s Chinese camp. 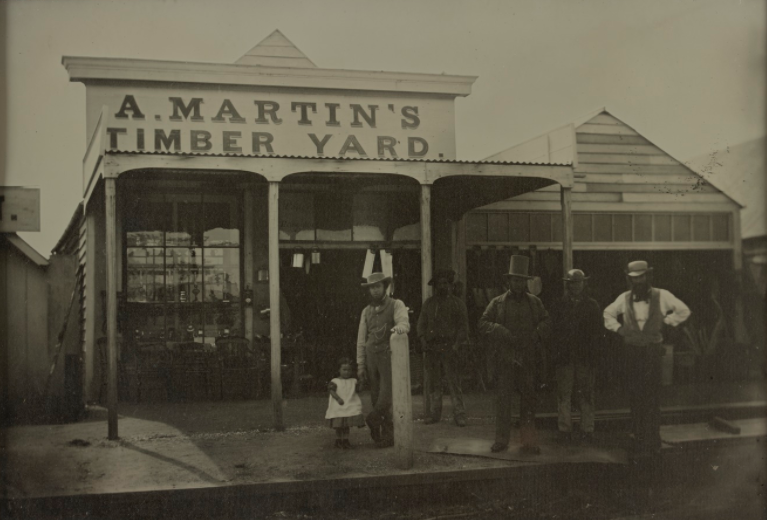 During 1852 a few of the more adventurous miners from Castlemaine struck out looking for new opportunities, initially to the fields that opened up around Wedderburn, but then south following creek valleys and the tracks of squatters. By the end of 1852 gold had been struck at Tarnagulla (Shady Creek) and at the beginning of 1853 several hundred diggers arrived at Moliagul. The rushes gradually spread south to Goldsborough and Bealiba. They followed the creek beds, in particular Burnt Creek from Moliagul to Dunolly and on to Bromley.

As indicated above it took time for the gold rushes to spread across the countryside, but spread they did. Between 1852 and 1858 thousands of hopeful diggers scoured the land between the Burnt Creek and the Loddon River.

By the early 1860s the fossicking of alluvial miners had given way to deep lead company mining with shafts sunk along the Poverty Reef at Tarnagulla, Gipsy Reef at Goldsborough and works along the Burnt Creek. It was the company mining that gave the small towns their populations and hope for the future, but by the end of the nineteenth century even that had declined, and along with it, the fortunes of these towns declined.

This country did however continue to provide exciting opportunities for the traditional digger long after the easily obtained alluvial gold had disappeared from the Ballarat and Bendigo fields. The discovery of the Welcome Stranger, the largest nugget in 1869 was typical of finds which inspired a new wave of enthusiasm. This came from near the Bulldog reef near Moliagul and it was taken into Dunolly, reviving dreams of a golden future for the district. 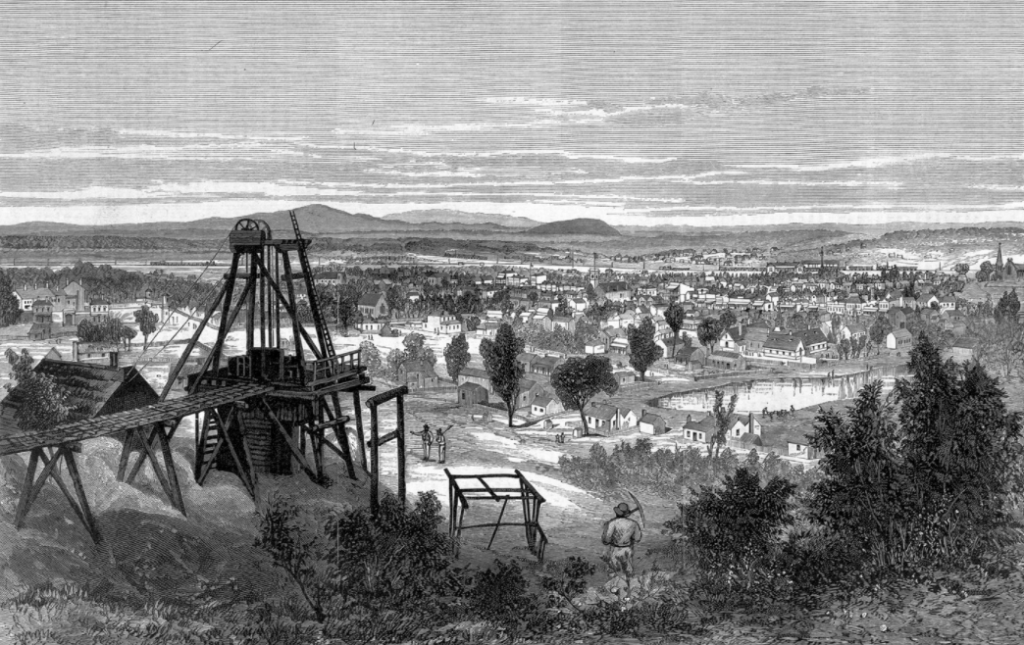 The town of Maryborough was laid out by W A Taylor in 1855. He had also been responsible for the surveys of Dunolly (1857), Tarnagulla (1858), Bet Bet, Avoca and part of Carisbrook. The main street of Maryborough had to be surveyed with a curve, because it was obliged to follow as reasonably as possible the line of the diggings along the Four Mile Creek and of an arm of the Main Lead.

The town has any number of substantial nineteenth century buildings, reflecting its importance as a commercial centre and centre of government. The Italianate Civic Square is a particularly fine assemblage of nineteenth century public buildings constructed around a well-proportioned town square.

No goldfields town was complete without its public park or botanical gardens or reserve. Maryborough was no exception and claims three significant public gardens.

Royal Park was the site of the Old Camp Reserve and was turned into a public reserve in 1862. It is now the Maryborough Golf Links. The Botanic Reserve, now known as the Phillips Gardens was purchased by the council in 1860. It contains a lake that was the town’s first water supply. Princess Park was set aside as the town’s main recreation reserve and has provided a centre of sporting activity since the late 1850s.

‘The discovery of the Welcome Stranger, the largest nugget in 1869 was typical of finds which inspired a new wave of enthusiasm’

After the impact of gold Maryborough managed to remain an important regional centre and developed itself as a centre of secondary industry with the twentieth century seeing the growth of flour milling, butter manufacture, knitting mills, precision engineering and a wire works.

Dunolly was surveyed and sold off in 1858. At that time it seemed to be a tent town, but there was evidence of a more permanent settlement establishing itself amongst the temporary structures of the diggers. The Bendigo Hotel had been built in 1857 and it was promoted as the town’s premier hotel. It even hosted hearings of the Court of Petty Sessions in the hall attached to the hotel and it also became a coaching agency and stop over for the coaches moving around the district.

By the middle of the 1860s Dunolly had two distinct foci; a commercial centre along Broadway and public buildings to the east of Market Square. The Wesleyan Reserve with its brick buildings was also an important element of the town, reflecting the importance of religion to the mining community, which was otherwise considered to be wild and unruly.

The discovery of the Scandinavian Lead at the beginning of 1859 saw the genesis of the town of Talbot. The town grew rapidly and by March of that year the main street had been christened Scandinavian Crescent with up to 100 businesses spread along it. Like most of the new goldfields towns it was largely constructed of tents, but it did quickly establish substantial timber and iron structures.

The churches were early to establish themselves with the Primitive Methodists and Wesleyans being to the fore. The latter had a portable iron chapel in Oxford Street, and the Roman Catholics went on to build a church in Scandinavian Crescent. The population peaked at 30,000 in March 1859 and by this time there were five banking agencies and upgrading of commercial premises.

Transport to the area was difficult with the only means being an inadequate road system serviced by horses, carts and carriages. It wasn’t until 1874 that a rail link to Castlemaine was opened. The current grand station building wasn’t constructed until 1891, by which time Maryborough was seen to be an important regional rail terminus.