The Traditional Owners of Country for the area today known as the Northern Grampians Shire and recognised as Registered Aboriginal Parties are the Barengji Gadjin (the Wotjobaluk, Jaadwa, Jadawadjali, Wergaia and Jupagulk peoples), the Dja Dja Wurrung peoples and the Eastern Maar peoples. They have an ancient history, culture and connections to Country that remain strong to this very day.

The area’s more recent history includes its role as a tourism mecca and gold rush landscape.

Tourism played an important role in this area, from an early time. It was based around the scenic beauty of the Grampians. As early as 1866 the Stawell Roads Board had commissioned a photographer to take views of local scenic spots. The Grampians with its dramatic scenery proved a major attraction. The improvement of roads and the opening of the railway to Stawell in 1876 made the Grampians more accessible. Visitors often stayed in guesthouses in Stawell and ventured to Halls Gap by gig, buggy or coach.

Early discoveries of gold occurred at Carapooee Creek in 1851 and Pleasant Creek (modern Stawell) in 1853. However that field didn’t yield substantial amounts of gold until 1854. By 1855 gold had been discovered at Bakery Hill on the northern outskirts of St Arnaud. 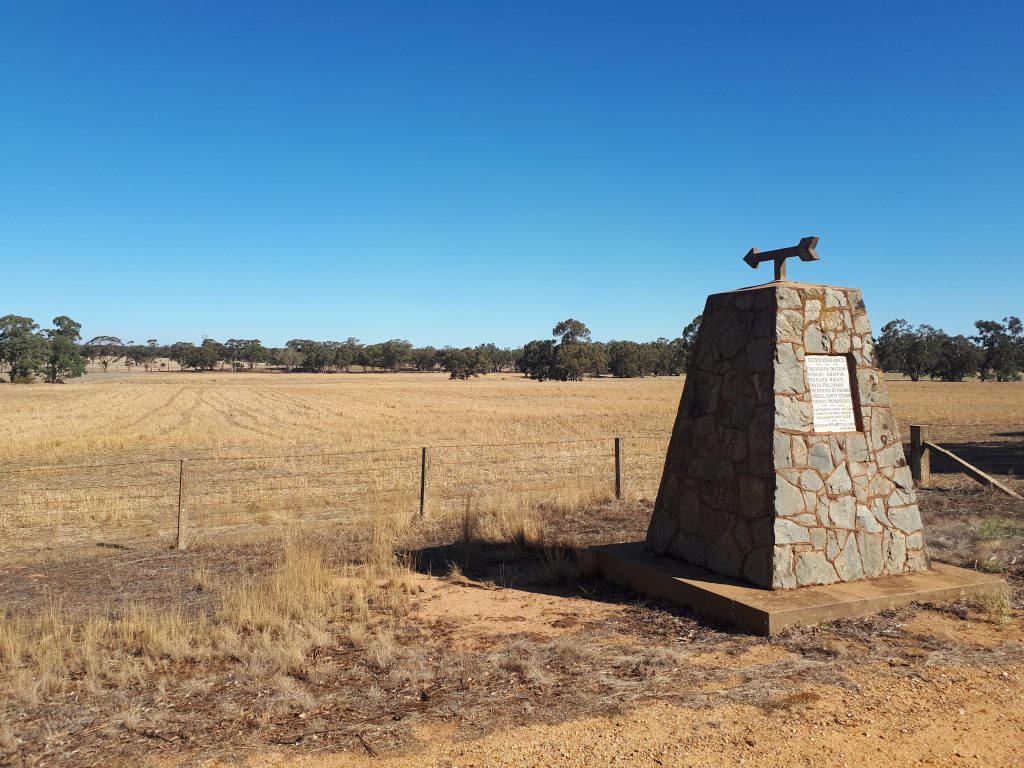 As with most of the diggings the initial rush relied on the discovery of alluvial gold or what could be extracted from shallow shafts. Distinct fields were discovered at: 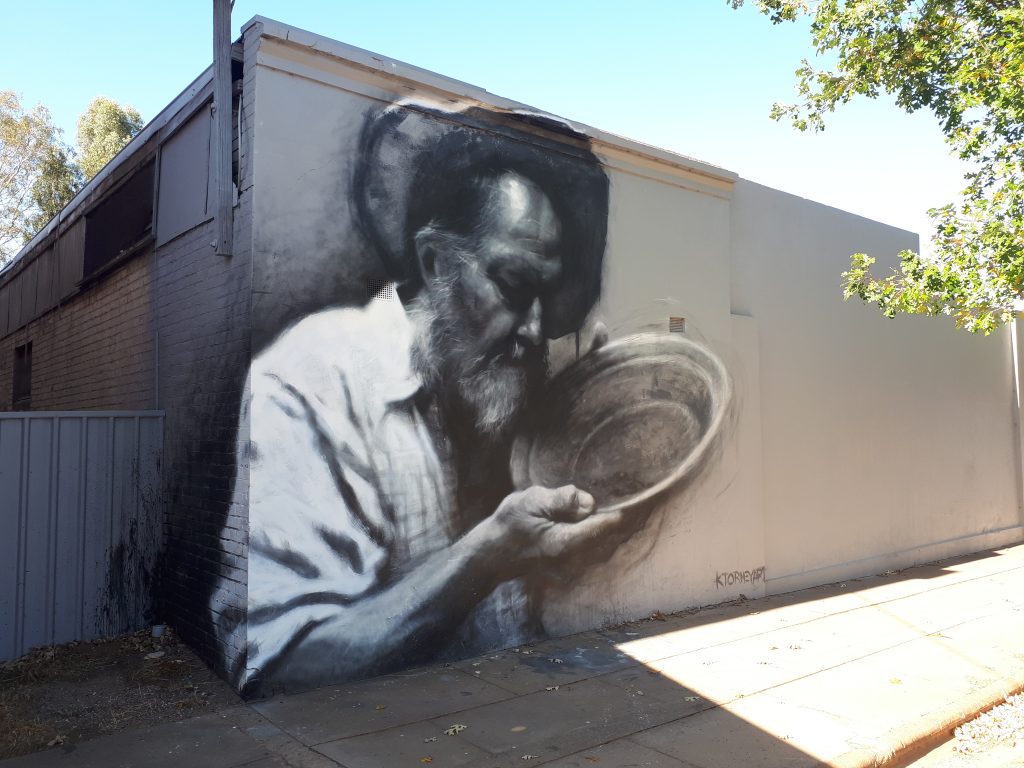 The goldfields were generally seen to be a melting pot for many nationalities and whilst this was true for the fields in Northern Grampians it is also true that a significant number of the diggers originated from the British Isles. Almost three-quarters of the population of St Arnaud in 1861 were either born in Australia or England, Scotland and Wales (not that the Scots or Welsh would have seen themselves as Anglo). Fifteen per cent originated from Ireland.

The Chinese stood apart from these European diggers and many found their way to this district from Robe in South Australia, having been unloaded from ships there and finding their way to the diggings overland. The Chinese were often not part of the original rushes and were content to re-work diggings abandoned by the Europeans. For example, the Chinese Camp at St Arnaud was established in 1855, when Europeans had all but abandoned the field. 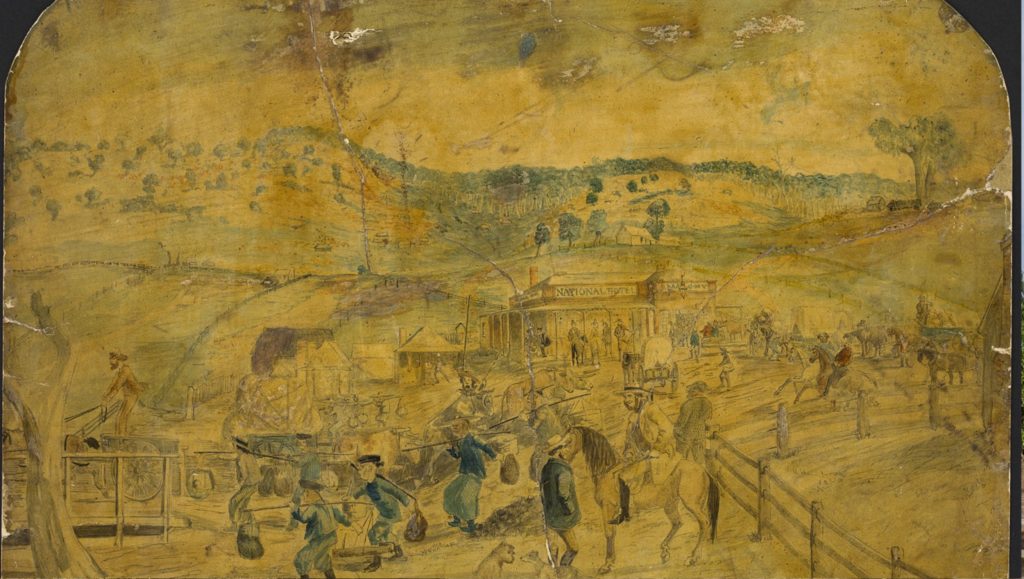 ‘The Chinese stood apart from these European diggers and many found their way to this district from Robe in South Australia, having been unloaded from ships there and finding their way to the diggings’

Northern Grampians did not provide much result from deep lead mining; however quartz reef mining was carried out for seventy years. At Pleasant Creek the quartz outcrops at Big Hill proved a rich source, whilst at New Bendigo (St Arnaud) the Bristol, Wilsons Reef, Sebastopol Hill and Nelson Reef proved productive.

Water supply was always a problem on these fields with natural sources such as Orr’s Creek and Pleasant Creek being unreliable. Water was carted from the Avoca River, but it ultimately became polluted. The story of obtaining adequate supplies for both mining and townships is a story in its own right.

Transport was a major issue in this part of the goldfields with local Roads Boards charged with developing and maintaining roads. As a result tolls were charged for road users with toll gates established at the Archdale bridge over the Avoca River and at Great Western. Cobb and Co extended its services through this region and provided the earliest and most reliable form of mass transport. The 1870s saw the arrival of the train line and its expansion out to Horsham. A further line was established between Dunolly and St Arnaud with 1880 seeing a further extension from St Arnaud to Donald.

Following the departure of the gold diggers the countryside returned to pastoral industry as its main source of economic activity.