Ballarat’s landscape formed 500 million years ago. Through a series of dramatic changes caused by tectonic forces, erosion, volcanic activity, climatic change and water flows, Ballarat’s alluvial and deep lead gold deposits were formed. Today, Ballarat sits within a distinctive setting. Central Ballarat is characterised by its strong grid pattern over a bluestone plateau overlooking Ballarat East with its irregular layout, and the important cultural and visual landmarks of Mt Warrenheip, Mt Buninyong and the forested ridges that help frame the city.

The municipality extends across parts of the Traditional Country of the Wadawurrung and Dja Dja Wurrung peoples, who have lived here for at least 50,000 years and remain connected to these landscapes. Their ancestors shaped the landscape through their activities, knowing it deeply and imbuing it with important cultural and spiritual meanings.

Ballarat is thought to be named from two Aboriginal words: ‘balla’ meaning elbow or reclining on the elbow, and ‘arat’, meaning place. The whole Country embodies songlines and storylines that connect Wadawurrung and Dja Dja Wurrung people to places. Places where Wadawurrung and Dja Dja Wurrung old people lived and contemporaries are still living today. Places for hunting, fishing and harvesting. Places that witnessed large gatherings, as well as spiritual and ceremonial locations. Through their cultural practices, stories and traditions, knowledge was built and shared, generation by generation and continues to be today. Significant landscape changes were witnessed too. Wadawurrung stories tell of volcanic eruptions and floods – the rising levels of the seas. Displacement and loss is also part of the story for Wadawurrung and Dja Dja Wurrung peoples, and the landscape once named by them has now been overlain with other names.

Ballarat has become home to people from many Aboriginal and Torres Strait Islander groups throughout Australia and remains part of the Kulin Nation, an alliance of five Aboriginal nations in central Victoria that have similarities in language, custom and tradition. Their collective territories extend from around Port Phillip and Western Port, up into the Great Dividing Range and the Loddon and Goulburn River Valleys.

The occupation of Country by settler peoples also brought significant change. The landscape today is dotted with farms, small settlements and towns that reflect these migrant cultures, primarily derived from the UK (English, Irish, Scottish, Welsh and Cornish), North America, continental Europe and China. But many of the best places to live and the easiest routes to travel reflect both Aboriginal and settler peoples’ movement patterns.

Occupation of Aboriginal peoples’ traditional lands began with graziers bringing in their stock and finding ideal pasture, water and house sites. The discovery of gold quickly attracted other migrants from near and far, who set up transient mining camps and reshaped parts of the landscape – extracting heavily from it. Aboriginal people played a key role in the economy of this period by providing miners with food, shelter, clothing and local knowledge, including in some instances, the actual locations to find gold. They were and continue to be part of the social, cultural and economic fabric of Ballarat.

The initial focus of the gold rushes was Buninyong. The town of Buninyong had been established prior to the discovery of gold and the rush to the town in August 1851 preceded the much larger discoveries in Ballarat soon after. Buninyong ultimately became better known for the deep lead workings of the Buninyong Company. By 1888 it was still quite prosperous with a number of reef mines and the Main Lead still operating.

Throughout the 1850s miners underwent many hardships, but one of the most disliked was the government gold licence, which cost hard earned money simply to be allowed to explore. The story of the Eureka Stockade is well known as the reaction to this taxation impost. 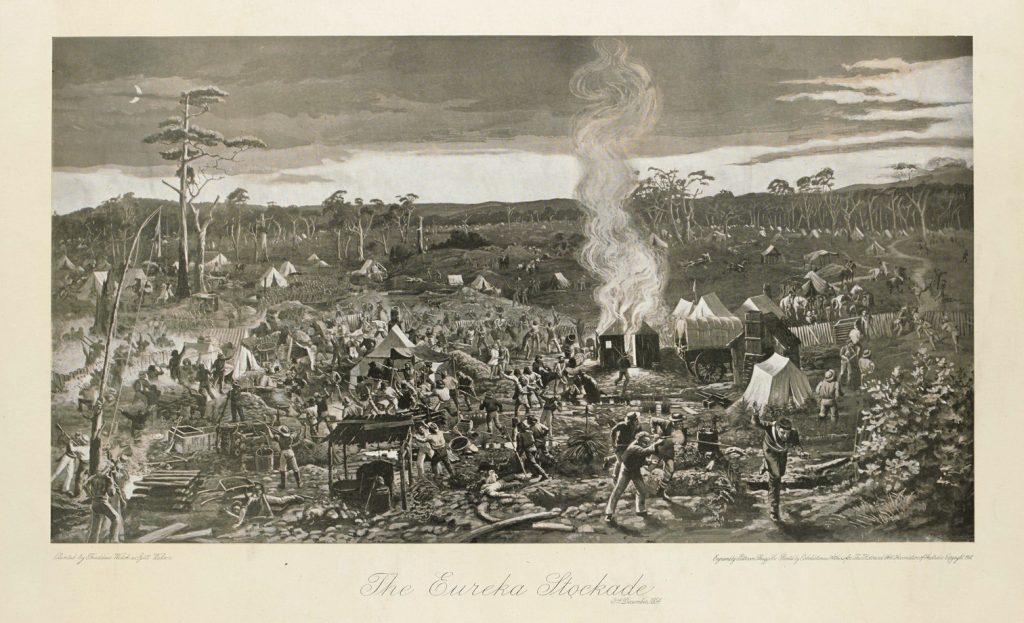 ‘Throughout the 1850s miners underwent many hardships, but one of the most disliked was the government gold licence’

The discovery of gold brought people from across the world to Ballarat, the majority being English, Irish, Scottish, Welsh and Cornish. However, the influence of other nationalities such as the Americans and Italians was obvious once dissension with the authorities arose. The Eureka Uprising of 1854 included men from outside the British Isles. This legacy is demonstrated through the naming of mining areas such as Canadian Gully or Yankee Flat Road.

In the early years Ballarat consisted of two towns; Ballarat West, favoured by the professional and businessmen and East Ballarat, the centre of the miner’s life. The remnant buildings, particularly residences enable us to understand this split.

Ballarat was to become a company town early on. Once the alluvial gold petered out partnerships and companies were formed to drive deep lead shafts in order to extract the auriferous quartz. A regiment of lawyers enriched themselves as a result of numerous disputes while the brokers made and lost fortunes selling shares in the numerous companies that sprung up. However, there is no doubt that Ballarat was a very rich field and in 1856 alone, nearly 4 million pounds worth of gold was extracted from it.

From the mid-1850s Ballarat became the centre of mining technology with local engineering innovations assisting the new deep lead mining and overseas equipment being tested out at the Ballarat School of Mines.

The railway reached Ballarat in April 1862 linking it to the port of Geelong. This was the beginning of Ballarat as a major railway hub with lines radiating to smaller towns and settlements. This was but part of the city’s early establishment as a major provincial centre. As such it became home to hospitals, asylums, orphanages, churches, schools and government institutions. It also became an important centre for the Trade Union movement. All these establishments and organisations manifested themselves in grand buildings and by 1870 Ballarat had taken on an air of a very prosperous colonial city. The layout of the impressive Sturt and Lydiard streets with their exceptionally fine buildings, and avenue took place by this time and in itself was an indicator of the prosperity, independence and determination of the mining fraternity. 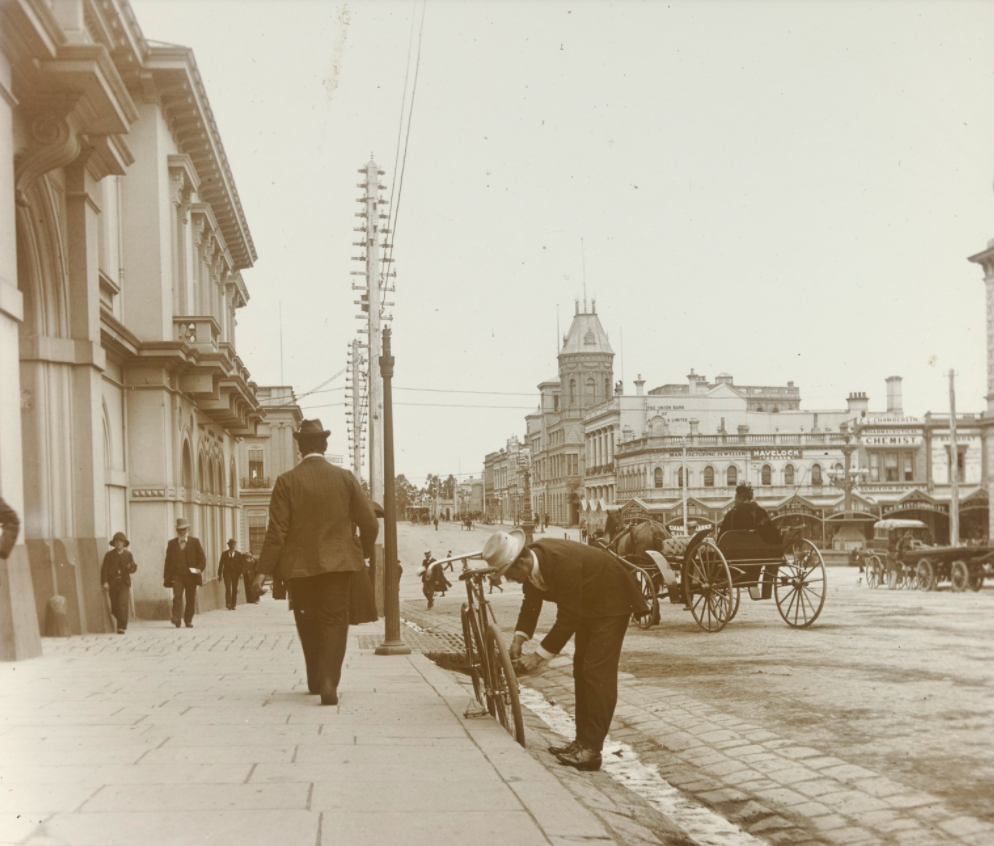 By the 1870s Ballarat had become a regional centre for finance, machinery, supplies, entertainment and professional services. Ballarat was distinctive in that its citizens, undoubtedly via its city leaders poured money into public works. The result was the creation of Lake Wendouree, a fine Botanical Gardens a substantial art gallery, an influential School of Mines, a grand Town Hall, and a significant hospital, but to name a few.

Ballarat has maintained its role as a regional capital throughout the twentieth century and is now one of Australia’s most important regional cities.

City of Ballarat, Our People, Culture & Place: a plan to sustain Ballarat’s heritage 2017-2030